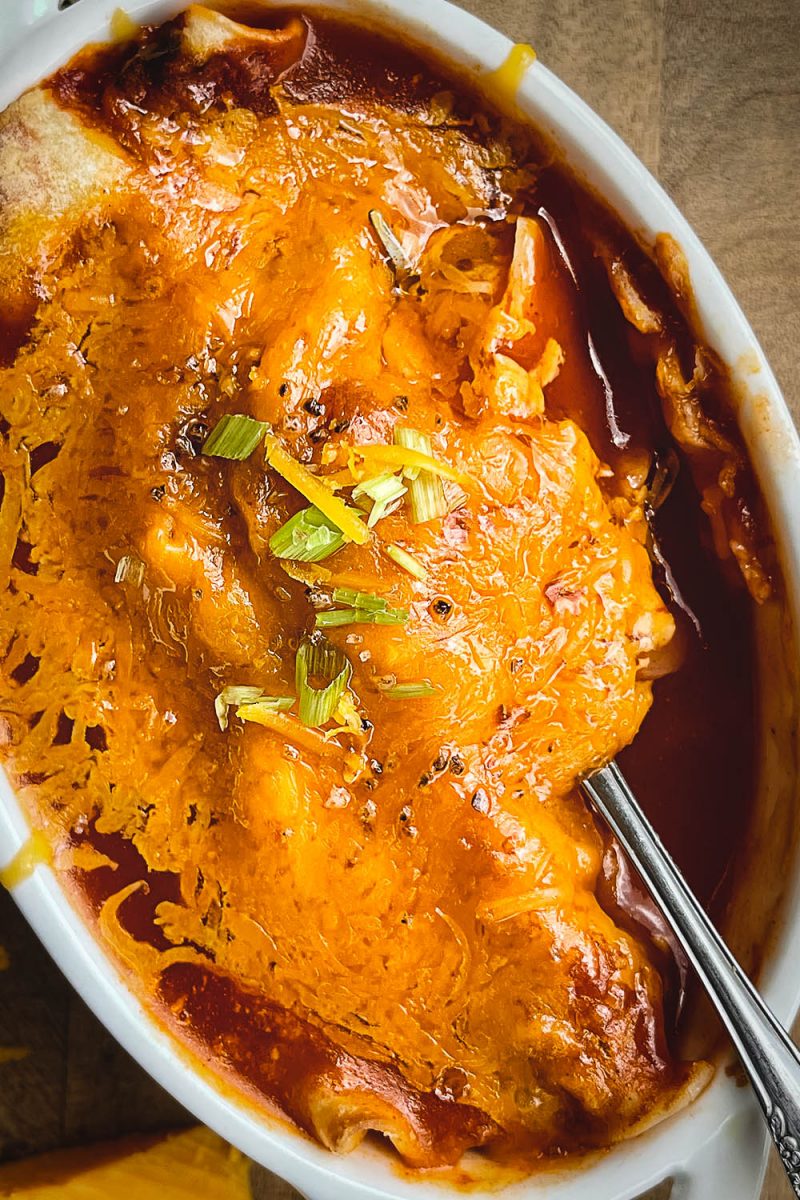 What happens when sweet biscuit batter and a mini

Bon appetite, my friends. This showstopper of a si

Peach crumble without the guilt? Easily whip up a

You know the one I’m talking about. Maybe it’s not the most gourmet or impressive. It probably isn’t a perfectly puffed souffle or savory beef bourguignon from the pages of Julia Child’s Mastering the Art of French Cooking. That’s not to say you don’t know how to cook both of those culinary masterpieces to such perfection that it would knock Gordon Ramsay’s socks off if such an occasion presented itself.

No. This is a dish you whip up quickly and masterfully for a potential sweetheart, for your family, or a special event. Maybe it’s one you save as a treat for yourself when the world is feeling especially cold or unnerving. Or all of those things.

I like to think of this dish as the kind nearly every cook keeps in their culinary repertoire because it’s the one secretly made with love.

An unpretentious casserole dish filled with bubbling cheese, enchilada sauce, sauteed onions, and corn tortillas seared and softened to perfection – this dish has been a centerpiece of date nights, potlucks, and dinner parties for the past 20 years of my life. My cheese enchiladas have been served to families at the Oklahoma City Ronald McDonald House and, more recently, to a group of Native American women in a local beading collective.

If let’s say, I like you or I love you or I’m at least fond of you, then you’ve probably experienced my cheese enchiladas.

And since it’s the history, the story connected to the food we love that makes it meaningful, you should know that this dish – each cheesy and comforting bite – is part of the story of a small town Native American girl and a Spanish teacher.

I didn’t grow up with much – a kid raised by a grandmother who woke at 5 am to work a low-paying job in a nursing home cafeteria. We ate meals cooked from government commodities – canned meats and canned vegetables, sacks of flour, lard, and something that almost passed for cheese – which made meals more a matter of practicality than pleasure. My grandmother regularly cooked a big pot of potato and green beans with water, salt, and pepper. Today, I realize the meagerness of that soup and what it meant – times were hard more often than not.

An oil boom in the 1980s took us briefly out of poverty but it didn’t last. And during middle school, when my grandmother’s failing health took its final toll, I found myself living with an aunt. She was a young mother working a minimum wage job. We lost our home. We moved from one shabby rental house to another, sometimes sleeping on the floor in a relative’s home because we couldn’t make rent.

Life can be a series of bad turns of luck where hardships only seem to compound but never get better. One winter things got pretty bad. We didn’t have money for heat. We didn’t have furniture. We didn’t have groceries. I walked to Mrs. Upchurch’s house and knocked on the door. I couldn’t really tell you why, it’s been so long ago now.

What I can tell you is that I started taking Spanish in the 7th grade and Jo Ellen Upchurch was my teacher. She was pretty universally beloved by her students and colleagues because she was warm and funny. She cared. It was authentic. She was a wonderful teacher, a stellar human being, and it showed.

She saw me as the naturally gifted student I was, even though I came from a home where no one cared about the grades I made or believed in a future for me beyond a fast-food drive-thru window. And somewhere along the way, in the years I continued to take Spanish, she became a kind of mentor and friend.

So, at that moment, I guess I could only think of one person who might understand. And it was her.

I was nervous, probably on the brink of tears, when she opened the door. And as she ushered me in, the truth came spilling out of me.

There are so many generous and kind things Jo Ellen did for me during her lifetime. But the one that I’ve never shared with anyone is what happened that day after I knocked on her door.

She drove me to the store where we filled a cart with sacks of groceries for my family. But not once, not for a second, did she make me feel awkward or ashamed to be poor. And I paid her back every penny as soon as I was able.

Over the years, Jo Ellen would invite me into her home, into the lives of her family, so that I could finish my senior year in high school when my aunt moved to another city.

She drove me over an hour away at 6 am to take my ACT tests. She made me fill out a college application to the University of Oklahoma, the only place I applied and was later accepted. I’m also pretty sure that she rigged the Spanish Club elections my senior year to secure me a spot as Spanish Club President, probably so it would help with that college application.

Jo Ellen Upchurch drove me to campus and moved me into the dorms. She sent me care packages with cards and letters written, maddeningly, entirely in Spanish. She gave me a home to visit on the weekends.

And there were little things too, like the fact she was endlessly telling jokes and recruiting me for shenanigans and pranks, so much so that laughter was a part of daily life. And there were the big things, like the fact that she believed I could succeed, even when the world underestimated me and told me in its own way that poor brown girls like me weren’t supposed to take up too much space, speak up, speak out of turn, want too much or expect to win, much less unapologetically demand our worth in life.

Mrs. Upchurch was also, notably in context to this blog, the person who taught me how to cook.

Jo Ellen was a gifted cook – her house filled with mouthwatering scents: a Mexican casserole, a savory meatloaf, a quiche, and the sugary smell of rum cake. These dishes were delicacies to a kid who grew up on bologna sandwiches, fast food burgers, and government commodities.

Cheese enchiladas were the first dish I learned to cook and, somehow through the years, I’ve never forgotten them. I don’t just mean the recipe, I mean the exact way she taught me how to make them.

I hope you learn to make these enchiladas, too. And when you do make them, let it be with love. In Native American culture, this act of creating with joy and putting your positive energy into your creation is called good medicine.

In life and in cooking, I wish you good medicine. And if you strive to be someone’s Mrs. Upchurch in this crazy and uncertain world, I can think of no better legacy to leave behind.

Now About Those Cheese Enchiladas…

There are only four ingredients to my favorite date-night and potluck dish: a block of sharp cheddar, one yellow onion, corn tortillas, and enchilada sauce.

These enchiladas require a few simple techniques to achieve absolute perfection. But don’t worry, they are so easy that a 17-year-old cooking novice mastered them.

Start by prepping your ingredients. Chop the onion, shred the cheese, and open your cans of sauce. Set aside a plate with a few sheets of paper towels and grab some tongs. Set aside a casserole dish and preheat your oven. Find a teaspoon and a few small bowls and set these aside as well. This is your mise en place moment, the time you take to prepare before you begin cooking, and it will always make you a better, happier cook.

Next, turn on some tunes. I like the Gypsy Kings for this dish. It takes me back to my brief career as a flamenco dancer in a high school troupe that performed at the Oklahoma City Festival of the Arts – another of Mrs. Upchurch’s Spanish club projects.

Now, heat a skillet until it is lovely and hot. Add a drizzle of oil, but not too much. Grab your tongs and your plate with paper towels. Add a tortilla to the pan and flip it as soon as it softens and bubbles. Repeat for each side and set on the paper towels. Add more oil as needed and blot off the excess. Do not add dry tortillas to your casserole. It will make them difficult to roll and it’s just wrong.

After your tortillas are done, add more oil, saute your onions until golden, and remove them to a small bowl.

Now, it is time to assemble your enchiladas. Pour a generous amount of enchilada sauce on the bottom of your baking dish. Cover it completely. Then create an assembly line of tortillas, onions, and shredded cheese. Use your spoon to add a dollop of onions, then a heaping of shredded cheese to the center of each tortilla. Firmly roll your enchilada, keeping it tight but do not tear it. Begin placing inside the dish, stacking each enchilada securely next to the last until the dish is full.

Cover your enchiladas with sauce, more than you may think you need, and smother the top with cheese. Bake in a hot oven until the top is bubbling. Then, remove and allow to cool. Serve with tortilla chips and your favorite salsa.