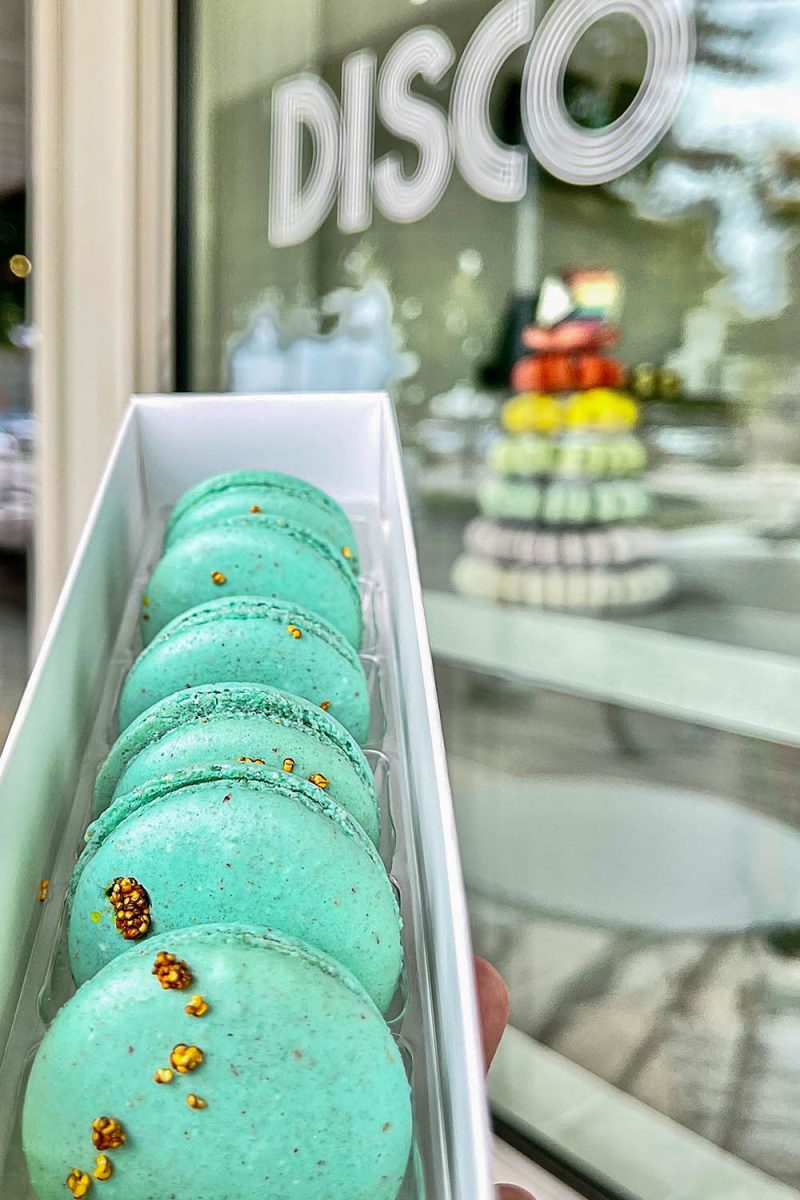 What happens when sweet biscuit batter and a mini

Bon appetite, my friends. This showstopper of a si

Peach crumble without the guilt? Easily whip up a

A Native American woman walks into a macaron shop…

No, it’s not the setup for a joke. It’s actually the surprising, somewhat unlikely, beginning of a collaboration between a cookie shop owner and a food blogger to create an Indigenous inspired macaron in celebration of Native American culture.

A woman in Texas obsesses over things like meringue, macaronage, and macaron feet as she hovers over a small toaster oven, perfecting one of the world’s most unforgiving cookies.

When Amanda moved from Texas to Oklahoma, she brought her love for the television show, The Office, and her love for macarons and turned both into one of the most popular cookie shops in Oklahoma City. The name of her shop, Cafe Disco, is a nod to the closet disco created by Michael Scott – a pop-up dance club for his employees.

Fast forward to July of 2021. It’s a blistering summer afternoon as I walk through the doors of Amanda’s boutique bakery on Main Street for the first time, where I’m greeted by the most Instagrammed pink couch in Oklahoma City, maybe in the entire state.

The shop is a bright oasis punctuated by a big neon sign. Beneath a glass counter, you can peruse the shop’s signature line of 10 macarons. These petite, colorful rounds can only be described as nibbles of bliss.

Macaron cookies are pillowy delights usually made up of buttercream, ganache, or jam sandwiched between two macaron shells. The famous Parisian cookie is believed to have originated in Italian monasteries as something called “priests’ belly buttons” – a name thankfully lost in the annals of time.

To make a macaron, you begin with one of three different variations of meringue – each uses a different technique. This meringue is combined with double sifted almond flour and powdered sugar to create a perfect, ribbony texture referred to as macaronage. The batter is piped into rounds and left to rest until a dry skin forms. Then, it’s a careful bake in an oven at just the right temperature so that the macaron feet – those ruffled edges – rise perfectly, beautifully.

No, it’s not an easy cookie to master. It requires patience, practice, expertise, and time to perfect. But one bite of a Cafe Disco macaron and you know that it’s time and effort well spent. And thankfully, for Oklahomans, you don’t need to be a master baker and you don’t need a plane ticket to Paris to enjoy these delights. Just visit the Disco. Because, yes, this cookie is so divine, a pair of nuns were able to use macarons as currency to survive during the French Revolution. Now, that’s a good cookie.

So, you may be wondering, what is a Native American inspired or influenced version of the macaron?

When I sat down with Amanda and her talented baking partner, Rachel Glover, we knew our goal was to incorporate ingredients with a rich history in Native American culture, while sourcing local ingredients as much as possible.

We discussed incorporating corn or cornmeal, potentially a corn jam. I brought in Sean Sherman’s Indigenous Kitchen cookbook as a source of inspiration and suggested looking at the wild berries harvested by Plains Indians – like blackberries and sumac – as a way to bring pre-colonial food and flavor into the recipe.

“We opened Cafe Disco with the intention of providing an inclusive environment that welcomes all and represents and reflects our community. My favorite thing to do is play with flavors and ingredients with macarons. When Kara came to me with an idea to collaborate on an Indigenous inspired macaron, I was very excited to learn more about the cultural history rooted in Native American Cuisine – something I was not very familiar with. Collaborating with Kara was an eye-opening experience that I hope to share with others to raise more awareness in Oklahoma.”

I also brought ingredients for Amanda and Rachel to play with – ground sumac berries, amaranth seeds, and red cornmeal grown by Native Americans on a reservation in Arizona at Ramona Farms. Amanda sourced locally grown blackberries at the Scissortail Farmer’s Market and I created a Pinterest board filled with beadwork and Native American art and jewelry to serve as design inspiration for Rachel.

Amanda’s team went to work in the kitchen, experimenting with flavors and ingredients. A few weeks later they invited me to taste cookies.

The Kiowa Disco is a macaron with a tangy, sweet filling of blackberry and sumac jam sandwiched between shells baked with savory red cornmeal and garnished with the toasted flavor and crunch of popped amaranth. It’s a perfectly balanced bite and one that highlights the beautiful and diverse ingredients of Native people.

This collaboration also succeeds in bringing focus to Indigenous cuisine, often missing in food conversations and very conspicuously missing from the menus of local restaurants in the heart of Plains Indians’ country.

Is this because Native American cuisine doesn’t exist?

It certaintly does exist and it is growing, with a new generation of innovative chefs like Justin Pioche and chefs like Sean Sherman, who is spearheading a movement to revitalize pre-colonial Native cuisine. There are plenty of Native American chefs, along with home cooks like me. We are creating dishes that celebrate or draw inspiration from our Indigenous culture. Yet despite this pool of talent, there is very little mainstream awareness about Native American cuisine.

Tragically, the food of the first Americans isn’t widely represented, if at all, in the modern food scene, even in places like Oklahoma.

This state is home to 39 tribes that make up almost 10% of the population. Yet, despite a history steeped in Native tradition, there is still a lack of representation of Native dishes or influence in Oklahoma City dining.

In the land of my ancestors, I can find Peruvian, Ethiopian, Chinese, or German food easily. But finding the food of the Native Americans? There are few places and none of them are celebrated in local magazines like the 405 magazine, which recently devoted an entire issue to tacos, including a section featuring several local, non-traditional tacos.

The Indian Taco, perhaps the most famous Oklahoma non-traditional taco, was not on the list. An oversight? A snub? Or perhaps it’s a lack of awareness.

But it’s my hope that will change. As more cooks and collaborators come together to celebrate Native American culture and food, we can move things forward.

Let’s start with a macaron.

More About the Ingredients

While most people may only associate Indian tacos or fry bread with Native culture, the ingredients of this macaron showcase the fact that the original food of Native Americans consisted of foraged wild berries and plants and ancient crops before colonial ingredients were introduced.

Heirloom Corn (Maize) – Ancient seeds produced hearty and beautiful varieties of beans and corn. Most of these heirloom seeds were lost when tribes were forcefully displaced from their lands but some remain. Ramona Farms is keeping special heirloom crops thriving on a reservation in Arizona. Many of these crops are hundreds of years old and would have been lost if Ramona had not decided to revive them.

Amaranth – Sometimes dismissed as a weed, this is an ancient plant with a rich history in Native American foodways. It was grown by the Aztecs and eventually made its way to the tribes of the North American Indians. Amaranth became a source of food and medicine, even considered sacred by some tribes.

The amaranth seed, or grains, can be popped or ground. Popped amaranth has a pleasing, nutty flavor which some describe as being similar to popcorn.

“Native people have shared plants and food since the beginning of time. Plants like amaranth were given to us by the Creator to keep us healthy and resilient. Our ability to share with each other traditional ways of growing our sacred food and medicine, how to harvest it, and how to use those plants is essential to our well-being and healing of generational trauma, which includes forced diet changes.”

Sumac – The berries of the sumac can be used to make Native American lemonade or sumac-ade, which the Cherokees call Quallah. Varieties of this shrub exist throughout America, including Oklahoma, and were used by different tribes. Sumac also served as a remedy to treat a variety of ailments, including the common cold.

Ground sumac berries have a deep, rich color and a bright tart, woody flavor. They make a surprising and beautiful addition to desserts. Like wild blackberries, sumac berries were foraged by tribes for hundreds of years.

Blackberries – Foraged wild berries were an important part of the Native American diet and blackberries were eaten raw, juiced, or preserved for the winter.

Organizations like the Native American Food Sovereignty Alliance are working with Native communities, chefs, and farmers across the country to revitalize the traditions of pre-colonial, sustainable foodways and diets for Native Americans. This work is part of a growing movement around the revitalization of ancient Native cuisine. Visit their site to learn more about Native American foods.

“We are an organization dedicated to restoring the food systems that support Indigenous self-determination, wellness, cultures, values, communities, economies, languages, and families while rebuilding relationships with the land, water, plants, and animals that sustain us.”